N
ow that you have thumbnailed your storyLoading..., it is time to start designing things, so you can begin to work on the finished pieces.

When designing characters for your storyLoading..., consider the following:

1) Do some research online, look for photos and art that you find inspiring and that you think shows the direction you are thinking of for your characters. DO NOT REUSE CHARACTERS! Design your own. Don't steal from other artists. But it is a good idea to collect ideas, images with bits and pieces in them you may want to consider using in your designs. Put them all into one big image. Such a large poster image is called a ‘mood board.’ It will help you quickly get a feel for the characters you want to design. Make a separate mood board for each character, and try to combine them to see how well they play together.

2) Try to think of the personality of the characters. How can you express these? Also, through shape language, and line language, color, et cetera.

4) Before starting on your comicLoading..., draw the characters many, many times in your sketchbooks. Familiarize yourself with them. Find out how you can go about drawing them consistently so that they look correct every time. This stage is also the moment to make sure that the character is fun to draw, which is important because you will draw him often! During the sketching phase, you are looking to keep trying different designs. Adding a lot of detailed patterns in a part of their outfit, for example, may mean you will have to take a lot of time drawing that character every time. Also, focus on how you can effectively construct the character from any angle and in any pose in such a way that they are visually pleasing and recognizable. That is what you are trying to achieve. Also, do it over several days. When you draw the character once, their design is in your short-term memory. Draw it several times over days or weeks results in the design entering your long-term memory because that helps you when you finally draw the comic.

5) Try to make sure that even the silhouette of the character is recognizable. It will make it easier for people to read as they will figure out more easily who is who.

6) Design the characters as ensembles: make sure their shapes and silhouettes, hairdos, facial shapes, clothes, et cetera are as different from each other as possible.

7) People also often make turnarounds of characters: the character rotated on a page and seen from any direction. I feel that it is more useful to draw the character in poses typical of that character. It is best if you learn to eye-ball, to feel if proportions are right, instead of depending on measuring. Characteristic poses give additional information as expressive poses can help characterize the person.

The design process works as follows:

1) You define the problem (the character you need to design, his personality, et cetera)

3) You start sketching ideas. These are prototypes. Don't fall in love with your first design. Draw many ideas. Push ideas. Try different approaches.

4) Leave the designs for a few days, then look at them coolly. Consider what you do and don't like about these design prototypes and develop some more designs until you are happy.

Part 1 — Write About the Character

Write down everything about the character: are they male or female? Young or old? Lively or not? How do they carry themselves through life? Attractive or not?

Focus on their looks, their personality, what their social surroundings are — family and friends, their past history, any quirks they have. Try to avoid cliche caracters. Give them traits you would not expect from “such a person”.

Do this with every character in your story. You are also designing an ensemble of characters. Try to make them as different as possible because it makes it easier to tell them apart when reading your comic.

Now that you wrote down everything about the characters in your comic, you can start to design those characters visually and find ways to reflect their character in their visual designs.

Gather reference images of actors and outfits and such. For each character, make a so-called mood board: a big poster that collages all the reference photos you gathered for that character. As with step 1, try to make them as different as possible, so they are easier to tell apart on the page.

When using photo reference of a real person, don't make them recognizable! You don't have their permission to use their likeness. Fortunately, it is easier to make a portrait not look like the person.

You can also take photos of yourself in outfits and poses you need or get friends and family to pose for you.

Get your sketchbook, and, as you did for the comics pages, start drawing quick thumbnails for the characters.

Use the reference photos you found, but make sure you don’t make exact copies! That is legally not allowed. Instead, use them for inspiration.

Try many designs, and if you like a design, try to push that design. Let different “actors” audition for the part in your sketchbook.

Things to focus on are 1. the face, 2. the body type (tall, short, fat, slender, et cetera). These are what nature gave them. Also, decide on 3. the outfit, and 4. their “gesture,” how they stand, walk, and typically move. The last two express their character.

It is okay, or preferable even, to spend a few days on it. Come back to your design the next day with a fresh pair of eyes.

Again, try to make them as different as possible so the reader can tell them apart more easily. It will also be easier to draw them if you give them distinct characteristics that make them instantly recognizable.

I will do this course along with you, and here are my character designs.

Jack — An under-cover police officer. He's in his thirties and chosen to look the part of a businessman. He wears a suit and appears to be flying somewhere for a business meeting. He is in good shape, physically. He has a hard time surpressing his “police stare” and is always analyzing what is happening around him.

Linda — A very attractive blonde in her 20s. She wears a red dress when she meets Jack, and an inconspicuous long coat covering that dress when she is outside the airport. She looks like a good girl, the typical girl next door, not like a suitcase thief at all.

Undercover police officer — A young African European woman. She is attractive but she doesn't flaunt it. She doesn't look like a cop at all.

Linda's accomplice — A young kid. He's anxious, he's new to stealing suitcases. He's constantly feeling the urge to look around nervously and tries to suppress this urge. He looks like Linda's younger brother.

I can't post my moodboards here, because I don't have permission from the owners of the original photos.

Jack: wearing a suit, he looks like a businessman about to go on a business trip, carryon by his side. Here, he's relaxing and having a drink before the flight. 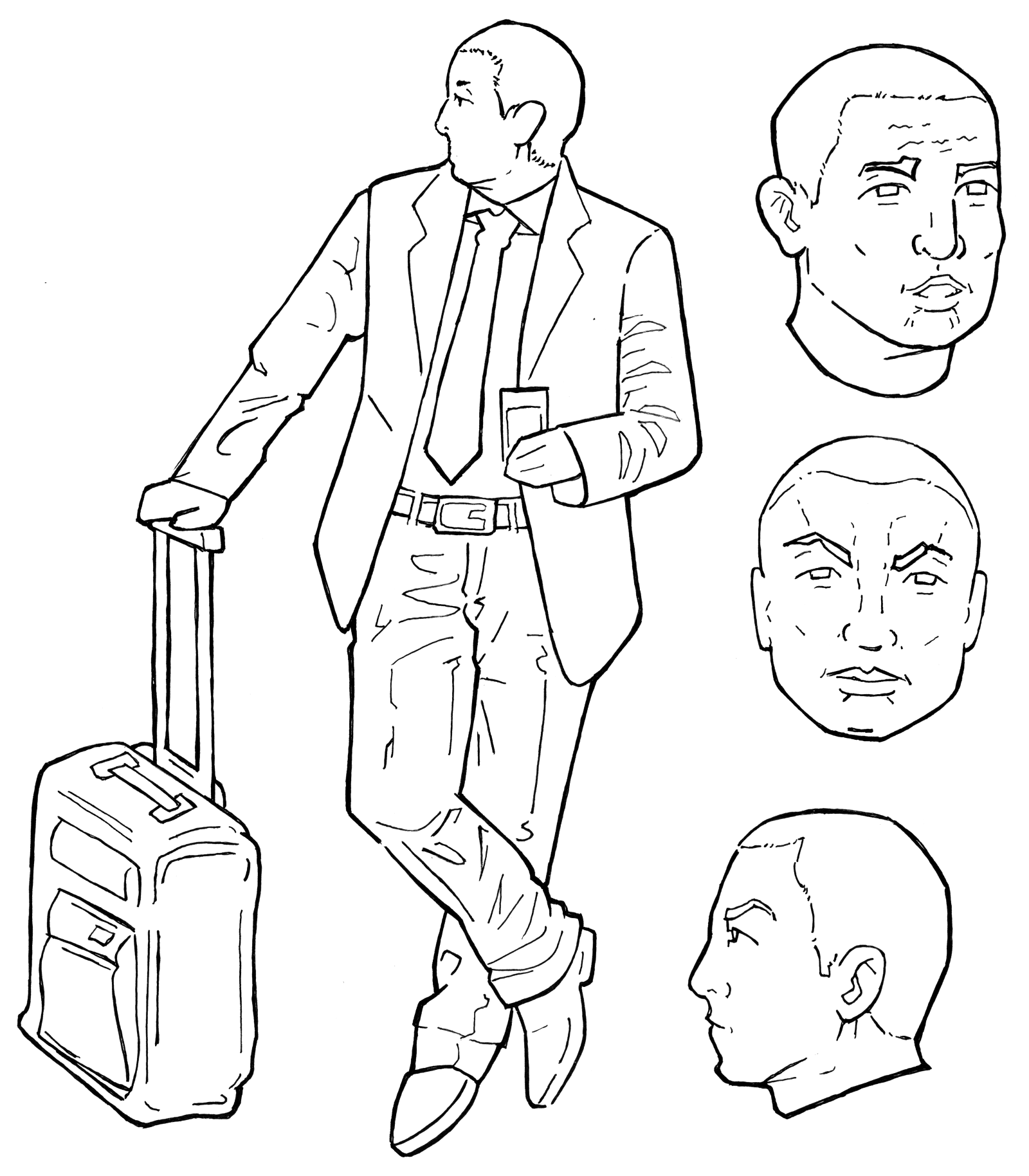 Linda: designed to distract men while her accomplice steals their luggage, she wears a dress that makes her look beautiful. The third image shows her wearing a coat that covers her rather eye-catching dress, so she can get away inconspicuously.