N
ow that we have a short storyLoading..., we have to kick it into shape a bit. We have to give it structure. For this assignment, we are going to look at the three-act structure of storiesLoading.... I feel they are four acts. They work like this:

1) Act 1: the world as it is when the storyLoading... starts. In the end, an inciting event happens that launches the reluctant protagonist into an adventure. He has a problem that needs fixing.

2) Act 2a: The protagonist launches into an adventure. He is a fish out of the water in a new world. He learns new skills and gathers things he might need to solve his problem. In the end — boom, the problem resurfaces.

3) Act 2b: The bad guys close in. The problem resurfaces. All seems almost lost at the end of this act.

4) Act 3: The protagonist fights himself out of trouble. He works himself up to the final climax and solves the problem he ran into in act 1 by using the skills he learned in act 2. After that comes the emotional unraveling, which should be short.

Maybe the protagonist learns that he had a different, much bigger problem, and he solves that instead, which will be the lesson he learns, a lesson that can be the moral of your storyLoading.... For example, a police officer might learn about a super-criminal and go after him. But maybe he needed to learn the lesson that he needs to spend less time with crooks and more time with his family. He was neglecting his wife and daughter, which was a much bigger problem. 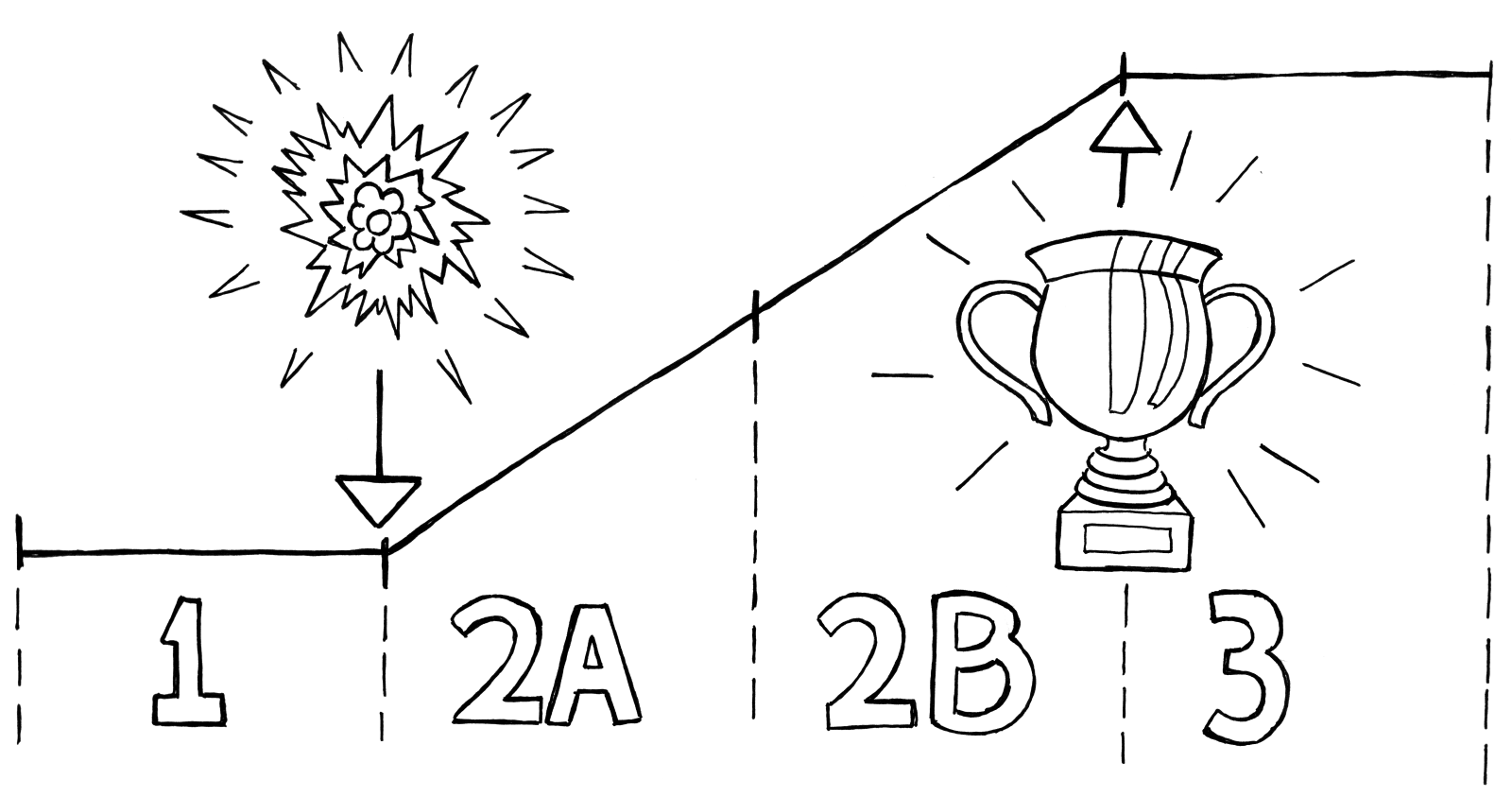 It doesn't matter if you write a long or a short story. The story will always have this structure. It will have a beginning (act one), a middle (act two), and an end (act three). Another way it has been put is that act one is the thesis (life before), act two is the anti-thesis (life after a problem occurred and a solution is to be found), and act three the synthesis where the first two acts work to form a new state which is the initial state, with the solution found in act two applied to the problem that caused this story to go on this particular path.

If you work on a longer story, make sure you vary the intensity a bit. After action-packed sequences, have a moment of rest so the reader can collect themselves. Vary the emotions the reader feels during the reading, make it an emotional rollercoaster, from happy, to angry, to sad, et cetera. Above all, keep making sure the reader cares about and wants to know how it ends. Do make sure you keep raising the tension, though. You are working up to a climax that has to be cathartic. If an earlier part of the story is more intense, the finale will fall flat on its face. 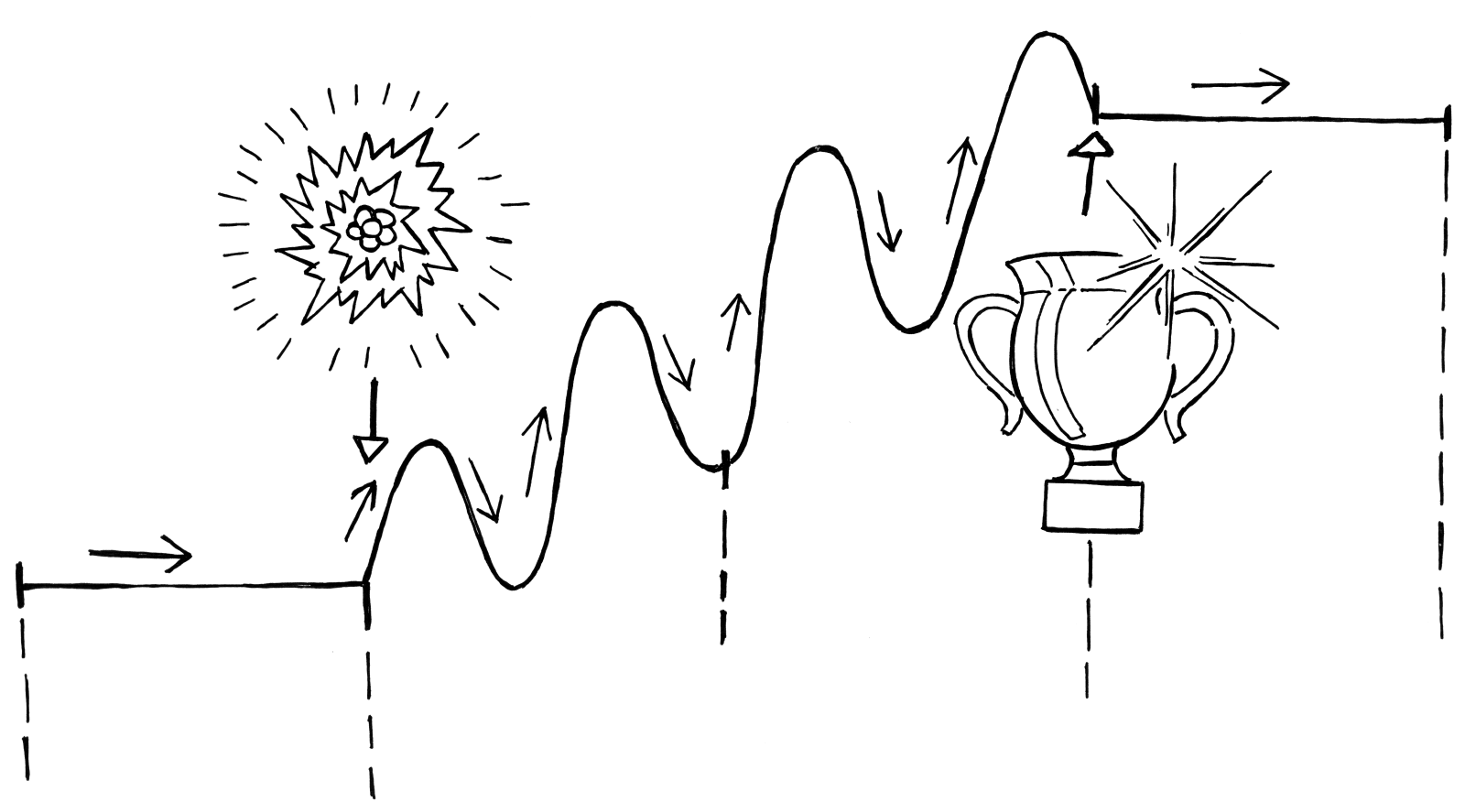 If you tell a story naturally, don't worry about the structure at first. We naturally tell a story that way. This structure just naturally emerges. Where this insight becomes useful is when revising it. Each of the four parts should be approximately equal in length. For example, if you make the second act — the middle two parts — too short, it will not feel right.

For this assignment, break your storyLoading... into these four segments.

Tip: Start late in the storyLoading..., and leave early. Don't start with lots of explanations — also called exposition — but weave the information in as you tell it. Keep the reader curious. Keep them interested in knowing more about the world. Try to make them want to spend some time with your characters, make them crave more information first, and then give some background information.

I will do this course along with you, and here is my storyLoading... structure.

Act 1: JACK, in his 40s, stands at a bar before check-in at an airport, carry-on luggage standing next to him when he suddenly hears a seductive voice. He turns and sees LINDA, 20s blonde, this stunning woman in a red pencil dress.

Act 2a: Linda flirts with him. He asks if he can buy her a drink. She smiles and says she has to fly. She leaves with a teasing smile.

Act 2b: He takes a sip, then he notices his carry-on is gone! He rushes out the bar and into the hall, where many travelers are walking in all kinds of directions. He frantically looks around, but he doesn't see her.

Act 3: Linda walks out of the airport wearing a long raincoat covering her red dress. And she wears a big hat and glasses, which cover her face somewhat. A guy walks next to her. He has Jack's carry-on suitcase. We zoom out more and see a guy whisper into a mobile device. Police cars screech to a halt before Linda and her accomplice. Jack comes running out of the airport, flashing his badge. He arrests her and her accomplice, and they are led to the police cars.